Will you help God defend Himself? Why?

Scripture Read: Judges 6:28-32 When the men of the city arose early in the morning, behold, the altar of Baal was torn down, and the Asherah which was beside it was cut down, and the second bull was offered on the altar which had been built. 29 They said to one another, “Who did this thing?” And when they searched about and inquired, they said, “Gideon the son of Joash did this thing.” 30 Then the men of the city said to Joash, “Bring out your son, that he may die, for he has torn down the altar of Baal, and indeed, he has cut down the Asherah which was beside it.” 31 But Joash said to all who stood against him, “Will you contend for Baal, or will you deliver him? Whoever will plead for him shall be put to death by morning. If he is a god, let him contend for himself, because someone has torn down his altar.” 32 Therefore on that day he named him Jerubbaal, that is to say, “Let Baal contend against him,” because he had torn down his altar.

Application: Some very important truth is communicated in this section. It speaks to both: idolaters and children of God. I realize that when I use the term idolaters, some may feel that is harsh. Let’s deal with that first. If we are honest we must face the fact that not everyone can be right. That’s the coward’s way out because they do not want to offend anybody. Yet, facing the truth IS offensive. It brings us to a reality that we cannot control. Jesus cannot be Who He claimed to be and every other belief system is also true. How can He be the messiah if the Jews are correct that the Messiah has not yet come? How can He be the ONLY way to God and Mohammad still be the greatest prophet?

Even Paul in his writings agreed that only if Jesus was really Who He claimed to be, the Christian faith is valid. The sad part is we seem to not be mature enough to agree to disagree. We have to kill each other! God is not that way. If you try to twist the Old Testament to say God is not tolerate, what you expose is your own agenda and the fact that you should take a simple course on hermeneutics. God’s judgments in the Old Testament were exactly that! God never punishes anyone for their good works, just their sinful ones, and He has done everything to give them the opportunity to have those evil works forgiven. So, if I am going to be honest, I should respect people’s right to believe what they want, knowing we all will give an account to our Maker in the end. If I die and appear before “Tonga” the volcano god, I will have to admit I have been wrong and Jesus Christ was a liar when He claimed what He claimed about Himself.

So in essence I must face the fact that there is only one true belief and the rest…all of them…are false. If Christ is not real…I am an idolater. Having stated this, let’s look at the truth from this passage. Joash challenges all those that claim that their god is real with the question of why they take it on themselves to defend, even to the point of using violence, their "god". If their god is truly God, then why can't he defend himself? This is a bold point and really cannot be rejected. Anything calling itself "God" does not need something as finite as a human to defend it. This is a fair question that should be asked from anyone that tries to justify using fear or violence to vindicate his or her god. However, the point also should speak to us that claim to worship the God of the Bible. Throughout history and even to this day there are those that claim to belong to the church, yet feel it is their job to defend God from those that do not believe in Him. Insults, demeaning words and even violent acts are used. This should never be! I do not need to defend God – He will contend for Himself. Yes, I can defend the Faith, which means to give reasons why it makes sense and why everyone should consider the claims of Christ. That should be done in love and with respect to each person’s right to disagree. They will answer for themselves and it will not be up to us, but to God. When it states in Scripture that we will judge angels, that is AFTER God has delegated that responsibility to us. We will be passing on what God has judged should be done. Every offense is against Him first and foremost, even the violence done to His people. Let’s learn from Gideon and Joash…God is God and does not need help from us to remain God.

Meditation Questions: When you hear someone insult God what do you feel? What do you do about it? Which feelings are appropriate in this situation; Hatred, Anger, Disgust, Pity, Forgiveness, Petition to God for them? When someone mocks Christ, what does that show you? What should you do about it? Should we expect people to appreciate Christ? Should we be surprised if people hate Jesus? If we get angry back and demean the person, what issues does that expose in our heart? Is it possible that we get upset not only because we love God, but perhaps we are insecure in our own Faith? When you really believe something that is truth, should you fear any other idea or position? What does knowing the Truth do? How does your answer align with your life?
Posted by Blogology - Nathan Leigh at 3:42 PM No comments:

Truth needs to be your roommate!

Probing Proverbs 6:20-23 My son, obey your father’s commands, and don’t neglect your mother’s instruction. Keep their words always in your heart. Tie them around your neck. When you walk, their counsel will lead you. When you sleep, they will protect you. When you wake up, they will advise you. For their command is a lamp and their instruction a light; their corrective discipline is the way to life.

There are two very important points here: the first is dealing with the responsibility parents have. If we allow life to “just happen” to our children, sin nature and the enemy is what will happen to them.  Humans do not live in a vacuum! There is no “neutral” ground for our children to stand on. They are either moving uphill toward God or downhill toward destruction. We cannot control them and they may even reject our input, however, the only chance they do have is if we are “proactive” in our counsel, encouragement and especially consistent in our modeling of a life close to God. If we love our children, we owe them a positive example of God’s love and wisdom…otherwise they are at the mercy of a very evil world.

The second point deals with receiving truth. We need to raise the bar here because not everyone has godly parents giving godly counsel. The principle is this – whenever and wherever God’s wisdom is given to us, we must keep it before us. Many times we hear truth and it passes from one ear to the other. This is why so many times in the Scriptures we see the phrase “He that has ears to hear, LISTEN”. “Truth” is a useless visitor; it needs to be a resident! This is called “conscious living”. When we meditate on the Truth that has been shared with us, we walk through life with our eyes open. Keep God’s wisdom at the front of your thoughts and your life will experience what Christ called abundant living!

Posted by Blogology - Nathan Leigh at 7:18 PM No comments: 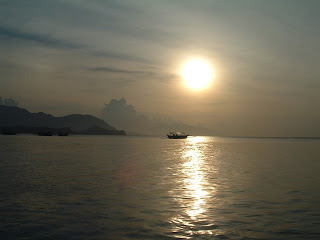 How close should we monitor our heart? Three years after I arrived in the Philippines an incident happened that has kept me alert to the importance of this – I would like to share it with you:

I was in my car going to a Bible Study in a little village called Cupang. A four-year-old girl ran out from behind a house and ran across the street - straight into my car. I saw her come out from behind the house and knowing how common it is over here to not notice traffic the way Americans do, I stopped my car before she ran into the street. She was looking behind her while running and ran right into my front tire. I was not moving when she hit my car – but in this culture that would not matter. I was the foreigner and that makes me rich and responsible. This is the way it is here.

This will be most difficult for me to share. But it is an important item to learn concerning cultural adaptation. Whenever you enter a new culture or, one enters your life (which is what is happening to many churches in the USA) you need to guard your heart from callousness. New ideas and ways of living are hard for all of us to get use to. Even if they really are unfair, different values also can make us hard if we are not careful. Things that are different and even wrong can cause a growth of callousness that God is not pleased with. If unchecked this callousness can lock our heart and render us ineffective. This is what I discovered with this accident with the four year old. Right after she ran into the side of my car my first thought was not for her, but “What trouble this will be for me now?” “ How much will this cost me?”  The year before my only thought would have been for her well-being. The friends that I have shared this with have all given me excuses. – “You knew she was all right - You have been burned before. Other missionaries have been really hurt financially by some Filipinos”

All true, but still not good enough. My actions after were correct, I was not to blame, but I still took the girl to the hospital with her mom and paid for x-rays, and got her cleared by a doctor.  But I know what was in my heart and I am ashamed of it. It exposed a hardness that was not there a year before. We need to allow Jesus to soften our hearts everyday and be mindful of it or that callousness will grow. Whether it is I in a new culture or you, as a new culture of living invades your comfort zone at church, we all must seek to remain sensitive (an over used word today) to those things that are important to God.

The Lord’s thoughts and concerns were for everyone else before Himself. His concern was not to defend Himself or be wrapped up in His rights. His heart beat for those around Him, a soft heart, one that was hard set against sin but soft toward those that commit it. No matter whether the difference in the culture is just new or even wrong we must not allow that to excuse hardness. Only the soft heart of Christ can push through all the garbage this world heaps upon people to make them aware of the loving Creator. Only a heart soft toward a culture can pray - and will take the time to pray. I have spent time with Him to forgive me and remove the callousness that had grown on my heart. I hope that you too will allow the Spirit to do a heart check,
Posted by Blogology - Nathan Leigh at 2:54 AM No comments: